Transmedia storytelling was a much hyped concept when I wrote my book, and it still is. In today’s pop-culture, different media are often used to build a coherent story world and build a consistent franchise. One definition by Henry Jenkins (2007) states:

Transmedia storytelling represents a process where integral elements of a fiction get dispersed systematically across multiple delivery channels for the purpose of creating a unified and coordinated entertainment experience. Ideally, each medium makes it own unique contribution to the unfolding of the story.

You need but google transmedia and you’ll find tons of analyses of best practices, from The Matrix and the Marvel Cinematic Universe to Star Wars and Game of Thrones. It’s become so omnipresent that I’ve already heard many scholars say at conferences: “Can’t we omit the “trans” by now and just call it media? Media have always relied on each other.”

True, but this is a specific practice, aimed at building a franchise that profits from a dedicated fan base. Transmedia is not simply media, and not simply storytelling either, it has become a highly lucrative business model. And like any business, someone’s got to run it well. Transmedia storytelling can go horribly awry if the products, stories and values don’t match those of the audience. Let me talk about a few pretty common pitfalls spotted during my pop-culture research.

1. Assuming too much knowledge

Transmedia storytelling is increasingly fan-driven and that’s not always a good thing.The Marvel Cinematic Universe for instance assumes a lot of knowledge from viewers to understand the latest Avengers films. If you have missed out on one of the films, you are likely to miss cues and references in Avengers: Endgame. As a viewer, you have to be on top of things and actively remember – where were the time stones in the films? Who was Thor’s mom again? Is that a reference to the Shield series that I stopped watching after season 1?

Sometimes transmedia storytelling strategies can be very estranging and off-putting. Kingdom Hearts was cited as a best practice in Henry Jenkins’ work, because multiple worlds and franchises come together beautifully. This is what synergy is about! But the latest installment, Kingdom Hearts 3, feels more like Kingdom Hearts 80. Each game is referenced, no matter what console it was released on, and all turn out to be equally important when consuming the third game. What doesn’t help is that the lore of Kingdom Hearts in general is very complex, with characters being version of each others bodies, souls, hearts or literally clones created by the villain. series are a few solid examples of complex worlds with their own lore and lots of references for insiders. Personally, I am among the many anti-fans of the game. While parts of it are beautifully done, the poor narrative and complicated tie-ins make then narrative very hard to follow and unappealing.

This results in fascinating user-generated content though – long recaps, complicated wikis and intense sub-Reddits. A great example is this  three-hour long lecture on the lore of Kingdom Hearts.

2. Estranging part of your audience

If you don’t respect your audience, transmedia can go wrong badly. A good example is the recent Star Wars Dark Visions #3 comic, which is part of a series of one-shots focusing on Darth Vader. In the comic, an Imperial nurse falls in love with Darth Vader, though he doesn’t even know she exists. She fantasizes about them being romantic together, fighting together, and of him punishing her boss who hurts her. This is when the style of the comic often switches to a romantic, warm, painted style, versus the colder blue-white comic panels. 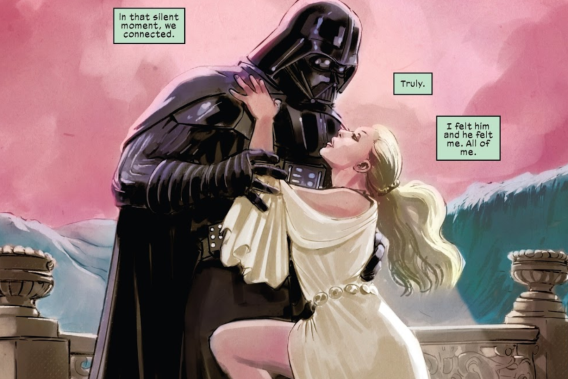 The comic reveals the character to be problematic and obsessed with Vader. For instance, she steals bits and pieces of his suit left over from surgeries. Her boss discovers these and tosses them out. She gets very distraught and pays Vader a visit. When she confesses her love to him, he stabs her in the chest with a light saber. Vader orders his minions: “Come get this garbage out of my quarters.” 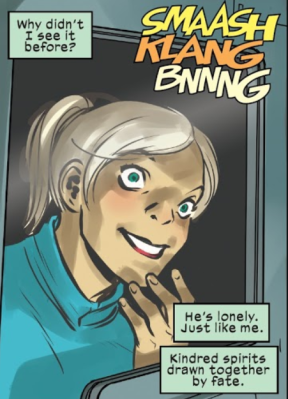 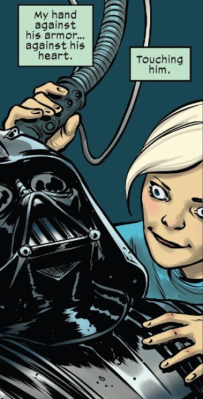 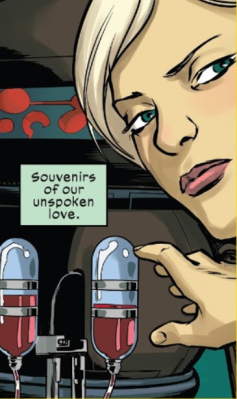 This comic is deeply problematic. For starters, female audiences that invest in Star Wars are likely to empathize with this main character. Many readers have interpreted the comic as a comment on female Star Wars fans. The story has been heavily debated already. This Twitter discussion is a great example. As you see in the thread, fans have referred to Phantom of the Opera in their discussions and even called the unnamed protagonist Daaé, after Christine Daaé. Not only do fans interpret Dark Vision #3 as an insult to female fandom, but also to romance as a genre and lived experience. This unnamed  character is punished for her romantic feelings throughout the comic. Her feelings are consistently made fun, while they are clearly a way from her to flee from abuse and a coping mechanism. If we should read this as a comic about mental illness, it is also a poor representation of that. Instead of an empowering narrative with a female PoV, female readers get treated to something twisted that does not resonate with them.

By now you hopefully agree that this is a heavily gendered comic. The Mary Sue writes: ‘This is not to say that Vader should have accepted her love and her problematic behavior, or that he shouldn’t have reacted the way he did. He is the villain, after all, but I guarantee, a male character who idolized Vader and who wanted to be like him would not have been treated like some sort of pseudo-Harley Quinn’

That is not to say that audience values should always set the norm. We have seen numerous examples of toxic fandom lately around transmedia franchises. Fans stating that the new Star Wars is too progressive for them, that the recent femme Ghostbusters offended them, or that rejected PoC in games. Movements like Gamergate largely stem from the idea that media should never change and nostalgia is  a key factor for such fans to engage in toxic behavior. This article by William Proctor explains these practices very well by using Ghostbusters as a case-study.

To be frank, I personally interpreted this comic as a comment on female characters and the female fandom that supposedly destroyed Star Wars.

The opposite practice of Dark Vision #3 also happens regularly, namely that progressive stories occur mostly in the trenches of a franchise. It is a pretty common practice in transmedia design by now. Inclusive stories are approved of, but only in transmedia products. Battlestar Galactica‘s Gaeta came out in a web series. Similarly several characters from Avatar: The Legend of Korra came out in the comics. Important moments and background information can be pushed to the fringes, where they will never upset the “mainstream” (e.g. masculine, straight) audience.

Transmedia has potential in that it can offer us huge, immersive stories. It is a highly fan-driven format and that is also its biggest risk. But let’s also keep in mind that it’s a corporate strategy and that it can lead to lots of narrative complexity. Sometimes it may also mean dismissing certain parts of the story, because they simply do not resonate with our believes.