During this Covid-19 crisis, videogame sales have skyrocketed. Confined to our homes, games are more meaningful than ever, and certain games, like Ring Fit Adventure, sold out in no time. Other hits in these months are the Final Fantasy VII remake and Animal Crossing, which has been described by many critics as the ultimate game during the pandemic.

Games offer us an escape. Walking and exploring these rich virtual worlds is particularly important during this lockdown, as Kagen also described in The Guardian. It allows us to experience new environments in a challenging time. Whether we move through the indoor spaces of Gone Home or The Stanley Parable, or lush environments like Journey, games dazzle. Beyond typical walking sims, gamers can turn to the Old West in Red Dead Redemption 2 or the vast landscapes in Breath of Wild. I spend my lockdown in the realistic New York simulation that is Spiderman, as well as different towns build by my friends in Animal Crossing. Virtual tourism has never seemed more meaningful.

But as I spend so many hours during Covid in my house, I also feel drawn to the concept of home, privacy, and identity. No game embodies these themes as intimately as Gone Home by The Fullbright Company, an indie classic that feels as relevant today as when it was first released by in 2013. How does this walking sim mediate home, relationships, privacy and family? How does it narrate the queer experience? 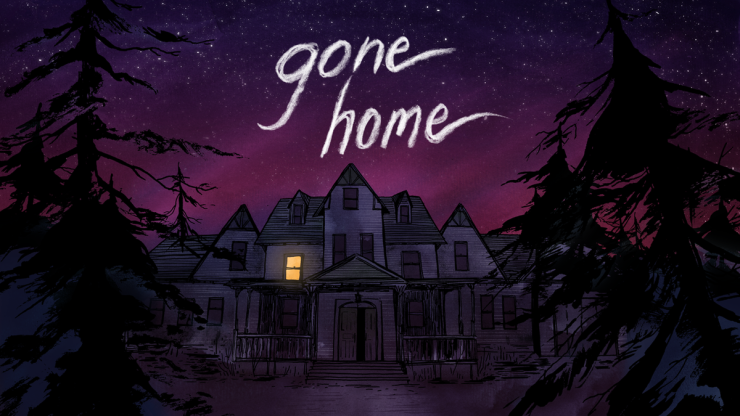 Gone Home as a Queer Archive

You play as Kaitlin Greenbriar, a girl who has just returned home after a backpacking through Europe for a year. It is a starry night in 1995 as she returns home. Her parents have moved to a mansion that they inherited from the father’s uncle, Oscar Masan. Kaitlin, however, finds the house abandoned. Gone Home poses as a horror game. This is already clear from the first letter that you find from your sister: ‘Please don’t go digging around trying to find out where I am. I don’t want mom and dad anyone to know.’

As you explore the house, you find objects that are linked to the past of your family. The narration is primarily by your sister, whose letters you can find, and are read to you. She describes her relationship with Lonnie, and her struggle to come to terms with her queer identity: ‘It feels like every minute that I don’t spend with Lonnie, I spend worrying about them finding out about us.’  Gone Home, however, also has other plot lines. Each family member has a past that can be explored indirectly, through objects and memorabilia.

Walking through the abandoned house is like walking through a museum – the whole game is structured like an archive. Gone Home is an object-oriented game. On Twitter, archeogamer Florence Smith Nicholls describes Gone Home as a queer archive by drawing from the work of Kennedy (2020) and Melissa Kagen’s work on archival adventuring.

In contrast, Kennedy (2020) writes that GH queers the domestic through making it unfamiliar-this ties in with the idea of the archaeological uncanny (Moshenska 2006)-quotidian objects made strange by decay. GH uses horror tropes to create unease.

Because Gone Home relies so much on observation and exploration, it can’t be seen separate from the affect it generates with its players. I often reflect on the difficult feelings that the game raises:

The purposeful tension and the unease that the house embodies, including the references to haunted mansion tropes. The constraints and silence of experiencing a queer lived experience second-hand. The awkwardness of snooping around and invading the privacy of everyone in your home.

The Actual Horror Story in the Gone Home

What if I said that there was a horror story in the game, though? One that relates to the father, Terrence.  Early on the player finds out that Terrence suffered from a writing block and gave up his career as a writer.The most haunting aspect of the game, then, is the revelation of what actually happened to Terrence during his childhood. Who was the uncle that he inherited his house from and what was their family like?

When the player unlocks the basement of the house, they finds the belongings of late uncle Oscar Masan. The room physically and literally represents the past that Terrence has suppressed. In the corner, there is a painting of his father that has been purposely damaged, perhaps by Terrence. Wandering through the room, the player explores documents of Uncle Oscar that explain that he once owned a pharmacy store, which he sold for a symbolic amount of money.  In a locker, the player finds a letter dating from 1963 that speaks of a family argument. Oscar begs to his begs for forgiveness, and explains that he has sold his business so he would not be led into temptation.

In this letter, a transgression is mentioned, but of what kind? Fans have discussed this quite deeply. Was he homosexual and did he come out to his family? A review of Clockwork Worlds (2013) frames these clues very clearly:

“1963. 1963. Where else had I seen 1963? Oh. Right. Terrence’s book series focuses on a spy from the future being sent back in time to stop the John F. Kennedy assassination—which, of course, happened in 1963. In fact, it happened on November 22, just about a week before Thanksgiving.  And then it hit me hard. On or around Thanksgiving, 1963, Oscar Masan abused his nephew Terrence Greenbriar.”

When I replayed Gone Home, I did so with this theory in mind, and ended up agreeing with this reading. In the basement, near the locker, a player can find hints of the abuse. For instance, height measurements which suddenly stop. A broken toy on the floor that suggests a child has been in the basement. It’s quite clear what the transgression was.

But I’d like to add to Clockwork World’s theory that Terrence’s writing in decoding the meaning in this video game. His writing, for starters, narrates his experience as a survivor deeply. At the end of the game, the player finds out that Terrence is finally ready to start writing again and fix his life. A letter near the kitchen confirms that Unknown Dimensions Lit is interested in republishing his work. The Accidental series is praised for its unique main character: ‘James Bond and Harrison Ford may be the dick-swinging heroes that modern suburban American wants, but John Russel, insurance agent by day, reckless history-revising sociopath by night, is the twisted peacekeeper that it deserves.’

In the dining room, the player finds a copy of an unfinished manuscript of The Accidental Warrior, a sequel that Terry has apparently been working on. In the green house, Terry has set up a new office and the player can examine notes about the new project in the rain. We find out that In The Accidental Warrior, John Russell does not have to save the president but himself. What this tells us is that Terrence works through his trauma as a survivor in his writing. Close to the ending of the game, this clue suggests that Terrence is still suffering, but committed to saving himself.

While Samantha is in many ways the main character of this game, the story about Terrence is just as important. Many spaces are related to Samantha, the rooms upstairs and the attic that we navigate to, are the main story as it were. The basement, which is literally the undercurrent and subtext, is all Terrence. I love how the game not only plays with narrative theory, but even embodies it by connecting certain spaces and directions (up, down, sub, top) to particular plot lines and characters. Each room acts like a story beat. Each object tells a narrative in its own.

Is this home haunted? Yes, I would say it is. Arbor Hill is rife with memories, and can be interpreted as haunted because of this past. Gone Home is a game about intimacy, relationships and secrets, but also about trauma. Some of the objects that you touch in the game are inscribed with this suffering. In horror, locations relate to trauma deeply, and this game plays with those motifs in a down to earth way.

Home is a difficult concept in this game, and in general. This virtual home feels even more surreal during the lockdown. It is a place filled with punk posters. Zines. Mix tapes. Kitchens with empty glasses. But home is also where domestic violence and abuse happen – a place that is impossible to escape from.