Games are increasingly crossing over into the domain of visual art. Abzu is a great example of such art games that provide their players with an evocative experience, rather than a competitive play. Produced by the creative director of Journey, Matt Nava, Abzu is best described as a spiritual, immersive diving game – a quasi-Journey under the sea. This indie has a rich atmosphere, and part of that is because of its gorgeous score by Austin Wintory, who also worked on Journey before.

Abzu has no clear narrative, and its protagonist does not speak, yet it manages to convey a story through its fantastic colorful world and surroundings. You can study the species of the ocean, but as the game enfolds you dive through fantastic ruins and technoscapes. Many wondered what the story of Abzu is actually about. I’d love to share my interpretation, which connects closely to the title and main themes of the game. Spoiler alert – Only read this if you have finished the game, and want to think through it. 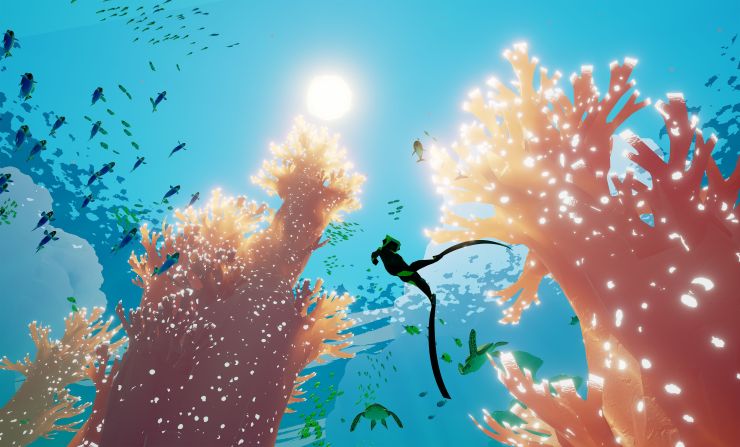 One of the ways in which Abzu stands out is in its lush depiction of life in the ocean. Colorful fish dance with the player, who can ride them, observe them and jump above the water with them. Remarkably, the first achievement that I got in this game was “water ballet” for jumping above the surface elegantly, like a dolphin. While Abzu draws from atmospheric games like Shadow of the Colossus and Journey, its world is fundamentally differently. Justin McElroy describes this very well in Polygon:

‘The world of Journey was so solitary that the occasional presence of a second player felt like an oasis. Abzu, however, is literally teeming with life. Manta rays glide lazily past the player; massive schools of fish swim in dizzying cyclones; dolphins play and flit circles around the solitary diver. There’s not a square foot of this ocean that doesn’t pulse with beautiful, colorful life.’

Through rich visual aesthetics, full of contrasting colors, Abzu manages to keep you engaged. In terms of mechanics, this game offers limited interaction and is more about observing. Like a diver, we do not interact, but rather see and play with the world around us. Connection with the life around you and being mindful of your surroundings is a key theme in this game. The player can literally meditate and empathize with (observe, become) different types of underwater species. Overall, the game is a wholesome experience. In its best moments, the beautiful score swells as you swim with gigantic whales. Emotionally, one character that you particularly connect with is the white shark, who dies early in the game but returns as a spiritual companion. 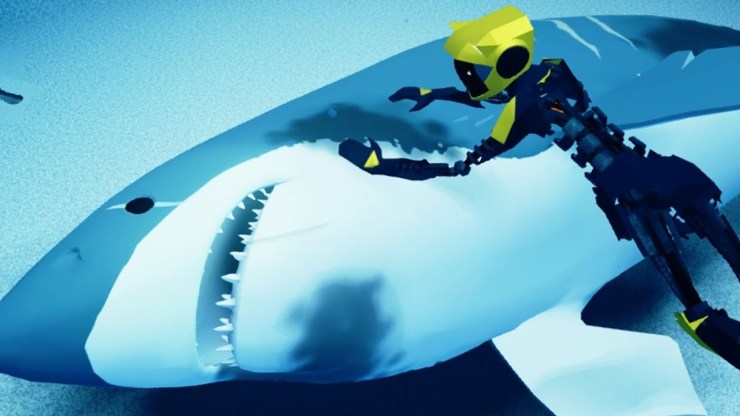 Abzu as a Cosmic Ocean, and the Identity of the Diver

In Akkadian and Sumerian mythology, “abzu” are the subterranean waters, and also have the connotation of limitless, endless space, as this book on Sumerian Tablets describes (p. 37). Common belief was that the abzu could be accessed. Lakes, springs, rivers, wells, and other sources of fresh water were thought to draw their water from the abzu. The abzu is part of a creation myth, and its family of archetypes is that of the “cosmic ocean”. I wrote about this idea before briefly in my blog about Death Stranding, and also noted its significance in that game. This archetype refers to the the primeval sea from which life itself is born and is common in most cultures.

By including visuals of cosmic rebirth at the end of each level – the diver literally swims in the water portrayed as a starry milky way – the game positions itself as a creation myth as well. In mythology, creation of life itself does not happen without Gods. In Sumerian mythology, the god Enki (Ea in the Akkadian language) was believed to have lived in the abzu since before human beings were created.

Through ruins and depictions of deities, the game Abzu positions itself as a creation myth. It shows the people making sacrifices to the God of the sea. The cylinder of Adda represents Enki similarly, surrounded by fish (2250 BCE). The ruins are significant in the game, and are the first moment where you are not positioned as a mortal, but a deity. The different murals clearly depict you the diver (as signified by the helm, the knee cabs, the red triangle), while people pray to you. You hold the power of creation, which is shaped like a flower, a lotus perhaps. That exact flower symbol can be spotted in the game during several levels, most significantly when you purify the waters near the end of the game. 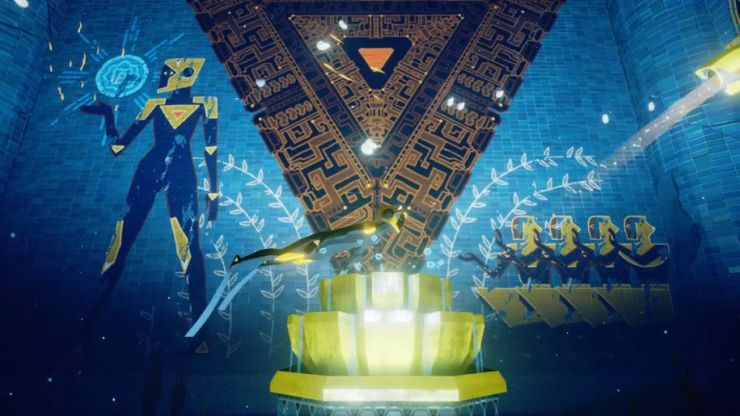 In Sumerian mythology, different waters and streams can connect to the abzu, or be purified to have its qualities. While this art game has barely any game play, most of what you do is turn on devices that seem to connect the water ways, thereby purifying them. In other words, you connect different waters and streams to the abzu. At various points, you can make life grow by touching chorals, and as the game progresses, your powers of creation grow until you are a fully bright deity, reincarnated, restoring the balance of the ocean. You do not destroy your enemies, but transform them and make them part of the ocean itself.

In other words, it is my theory that you are Enki, the God of water and creation itself, and that this game world is one cosmic ocean. Your ocean. The final level – a large, sunken temple – strikes me as Eridu, the temple of Enki. 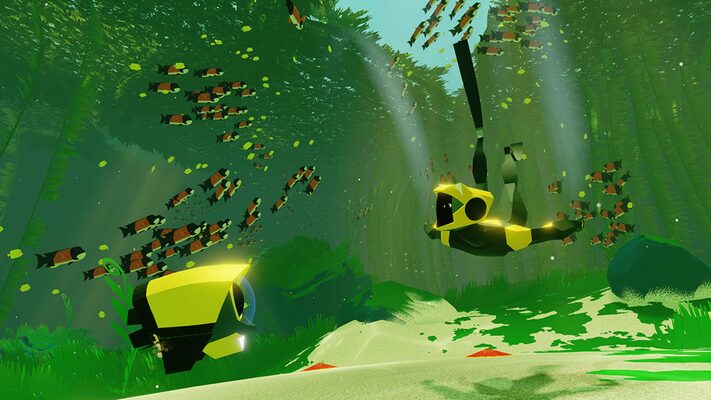 That leaves one question unanswered – what are those hostile, red triangles? These artifacts look other-worldly, not unlike Star Trek‘s Borg Cubes. Like the diving robots that swim with you, they add an anachronistic touch to the game. Are we in a distant past or in a distant future? Was an entire society buried here, like Atlantis? It is difficult to say. In the game, the most crucial moment is when we enter the large ship ourselves, where we can observe different automated processes. It looks like this ship can create different artifacts in a self-sustaining way. If this technology is man-made, it is highly autonomous and driven by AI. This short interpretation of Abzu reads it as an SF/F narrative where the Diver must defeat “the mother brain”. However, such an interpretation would clash with the historical and spiritual themes of the game.

The triangles could represent a deity as well, considering they are depicted in the mural as well. According to this site on ancient cultures, Enki has relations to many different Gods in mythology, from Tiamat to Enlil. It depends on which lore you examine. However, none of these stories has a close connection to technology or artifacts (like, for instance, Prometheus). What I also find striking is that Enki has a triangle on their diving suit. This implies that there is a strong connection between the technology and Enki.

Here’s my hot take – I personally read the cubes as a false deity and a comment on creation. While the Gods create life, humans in their turn create technology. However, technology has the tendency to control humans, and because of their hybris, human culture can be wiped out. In this sense, I do read the game as a sort of Atlantis-story, a doom scenario in which human civilization is wiped out. Again, the key is in the ancient drawings and ruins. What I think the mural depict is the humans turning away from Enki, and worshipping a false God instead, a technology that might have been created by them. The triangle marks both Enki and the tech as Gods, and as driven by the cosmic ocean. They are similar but different. Note in the image above how Enki looks away from the humans and towards the flower of creation. The “mother brain” theory might not be that far off. I believe that this game shows how humans have created artificial intelligence (AI), which caused their demise. A well-developed society now is buried under water, and spoils the cosmic ocean. Similar to games like Horizon Zero Dawn, society is reset, and only Enki  can help.

What do we see in the final moments of the game? The AI hive-mind destroys Enki, until they are but a skeleton, driven by the same life force as the tech-triangles. But this zombie version of Enki still has access to tremendous power, and by drawing from the abzu, they can turn into shiny God-mode. Enki restores the balance of the cosmic ocean and turns technology into the natural. From this perspective, the game can be understood as a large critique on our increasingly digital culture, through which humans loose touch with nature.

Abzu asks us to meditate, both literally and figuratively, and contemplate the meaning of life. Its message is clear – nature will always conquer over technology. 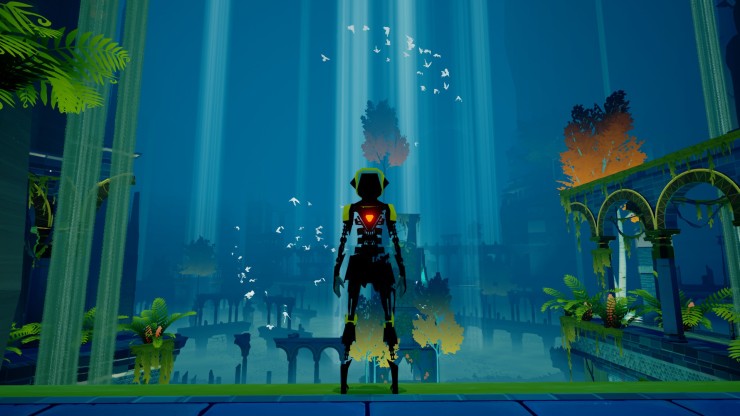