Since its recent release, Deltarune By Toby Fox has sparked many fan theories, just like its predecessor Undertale (2015). Primarily, fans want to know what the exact relation is between Deltarune and Undertale. Here’s my perspective, based primarily on my own analysis, and a quick scans on Reddit and Tumblr to see if I may have missed clues. My theory?

Multiple universes exist in Undertale, and perhaps it’s best to call this a semi-prequel of Undertale. The scientist Gaster, an implied character in Undertale, himself rewrote the lore.

Let me unpack that and finish by recommending some other great fan theories! 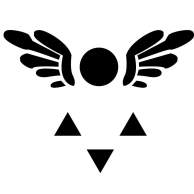 1. Deltarune is a different universe than Undertale

For those that haven’t played it yet (there will be spoilers below!), Deltarune is not a sequal or a prequel in the chronological sense of the world. We play an alternative universe.

This is probably best compared to The Legend of Zelda: Majora’s Mask – the colorful and weird sequel of Ocarina of Time. The N64 classic shows us a surreal and dream-like revision of the same characters, but with different names and living different lives in Clock Town. Our hero Link finally manages to go back to his own universe after stopping Majora’s Mask.  And yes, Toby Fox takes a page from Zelda. Even Deltarune‘s logo looks like the triforce and its myth of the chosen heroes echoes Nintendo’s classic.

Deltarune is no different than Majora’s Mask at first sight. We see similar characters in different places. They do not remember you or each other. Alphys is a school teacher. She’s not in a relationship with Undyne, now a police officer who never heard of her.

Here’s the creator’s word on this:

I will say that basically, what you’re seeing here is not the world of UNDERTALE. UNDERTALE’s world and ending are the same as however you left them. If everyone was happy in your ending, the people in the UNDERTALE world will still be happy. So, please don’t worry about those characters, and that world. It will remain untouched – Toby Fox tweet (2 november, 2018)

In other words, the Alphys and Undyne that we know are okay. Few! Toby himself states that this is an AU – don’t worry about those characters, and that world. But we do perhaps have to worry about this world and these characters…

But multiple universes exist in the Undertale canon, where our choices have implications, and where time lines can deviate. Sans says as much in the genocide route of Undertale: 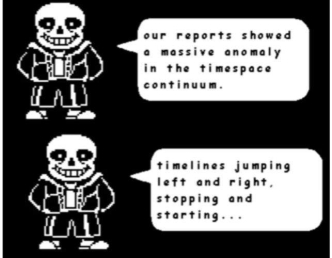 Time lines can be messed with. And I would argue that in both games, they have been messed with.

2. Gaster is trying to create a new time line

Just like in the first game, the scientist W.D. Gaster has his finger prints all over this game. In Undertale, an NPC states:

“I understand why Asgore [the king of Undertale’s monster world] waited so long to hire a new Royal Scientist. The previous one… Dr. Gaster. His brilliance was irreplaceable. However, his life was cut short. One day, his experiments went wrong and… well, I needn’t gossip. After all, it’s rude to talk about someone who’s listening.”

A scientist is meddling with time and space. He’s the puppet master of the Undertale lore, though no one is sure what his motivation is. For a full analysis of this character, who is heavily implied in the game, you may want to check this Kotaku article. Sans has some relationship with Gaster, fans presume. There has been much speculation that he was an apprentice of Gaster of sorts.  Can Sans also cross space and time? Is that how he teleports and why he knows so much? In Deltarune, he pretends not to know you, but also winks.

In Deltarune, we have not seen explicit Gaster references so far in the text. But it’s all over music. W.D. Gaster is evoked constantly in the soundtrack, as this YouTube compilation shows you. Even in the background, his tune is often being played, remixed or slowed down.

In the promotion of Deltarune, Gaster appeared as well. Toby Fox tweeted in Gaster’s speech – half sentences and caplocks providing cryptic remarks. About the future.

If we go by this tweet, Gaster clearly wants to reconstruct the timeline and the future of Undertale. Our character is not neutral in this. In Deltarune, we play a main character “Kris” that looks exactly like Chara, the first human who fell in the underground, and who was raised by Toriel. I assume that you truly are Chara. You may be called Kris, but your clothing and background story is Chara’s. This is no coincidence – Chara is the first human who visited the underground, which is also exactly what happens in Deltarune.

You are Chara. And this is not exactly Undertale’s world or a sequel to it, but both in a way. We are in a distorted time line.

We are playing a revisionist past that has been rewritten by W.D. Gaster. He aims to change the future.

I would even argue that this universe has been reboot multiple times already.  I was always struck by the similarities between Chara and Frisk in Undertale. Now we have Kris. All have similar back stories. What if this universe was already reset various times by Gaster?

The end of the first chapter is a haunting appetizer. Chara walks in slow, hampering movements. They seem possessed and rip out their heart. Evil is here. In this second game, we embody it more directly the previous title.

Like in Undertale, we still have to actively fight Chara (an analogy of ourselves, and our death drives in gaming). Is Gaster actively evoking this death drive and enabling it?

I think so. And I think this game what we get is flipped from the previous one. We see no humans above ground in Deltarune, and I find that highly suspicious: Has humanity been erased through purposeful time/space manipulations? Is Gaster’s purpose to erase evil, which is embodied by humans? 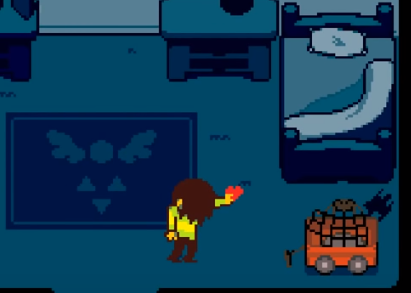 3. Predictions about the next chapters

Other cool fan theories/readings of the game

Chara’s is in purgatory – Here is one theory by LiNX 4 that supposes we are in the Undertale world, but that characters forgot their memories. It assumes that this is Chara’s story after she died, and that this is purgatory.

This is a parallel time line in which certain events happens and others didn’t – Swankybox argues this, and also refers to Gaster as a key element

The character ripping the heart out of their chest is not Chara, but Kris, this theory on Tumblr supposes