I became fascinated with blockchain primarily because of tokenization – the opportunity to add value to people’s activities and products through tokens. Social media created an unevenness in fandom, and tokenization had the potential to create reciprocity. In the platform economy of Facebook and Tumblr, that is important. At the moment, fans usually get nothing except social capital – clicks, likes, favorites. But the platforms themselves, from YouTube to Twitch, get a lot.

An exchange between users today isn’t truly peer-to-peer. The platforms are always in between. Especially in fandom, we are dealing with a complicated model. In studies on fandom, many of my colleagues still use positive terms like labor of love or gift economy, but these terms really create a false picture. There is value and profit in these models but it never reaches the fans. This is an uneven ecosystem, and some are on the winning end. Some platforms hide behind  loyalty programs for the very popular users (e.g. the influencers or the ”big name fans”), but is that enough? Should we shy away from studying profit and models like this?

Blockchain has the potential to provide transactions peer-to-peer, without the middle man, without the platforms. I love that. It gives me a sense of security that I missed for ages as a user, fan and scholar. Trends like tokenization – broadly speaking creating exchange of value through (digital) tokens – can be a great model to value user activities and user-generated content. But broadly speaking, i am fascinated by the transparency of blockchain; by the potential of giving ownership and governance back to users.

Science and Technology Studies
Let’s unpack blockchain and the innovation patterns of this technology (quick and dirty, maybe I’ll write a long read once!), with some key concepts from Bijker and Pinch. They often summarize their model as SCOT, the social construction of technology. Every new technology, they argue, has interpretative flexibility. People create different discourses and interpretations around a technology. Historically, the bicycle is a great example. This was considered a technology for man and deemed too sexual for women. Different prototypes emerged. It took ages for the bicycle discourses to become neutralized. At some point users reach a consensus about a technology (rhetorical closure) but this may take a while. But first, what is blockchain really?

Blockchain is a general purpose technology
Blockchain is open, and transparent, distributed and collaborative. Every computer is the same in this model. Cryptocurrency is just one application of blockchain. Its applications go far beyond this. Blockchain is a general purpose technology, comparable to electricity,. It works with distributed ledgers to organize and verify its decentralized data. Here’s a live visualization of it. Also, here’s a graph from Knowledgecrypto with a detailed read on distributed ledger tech. 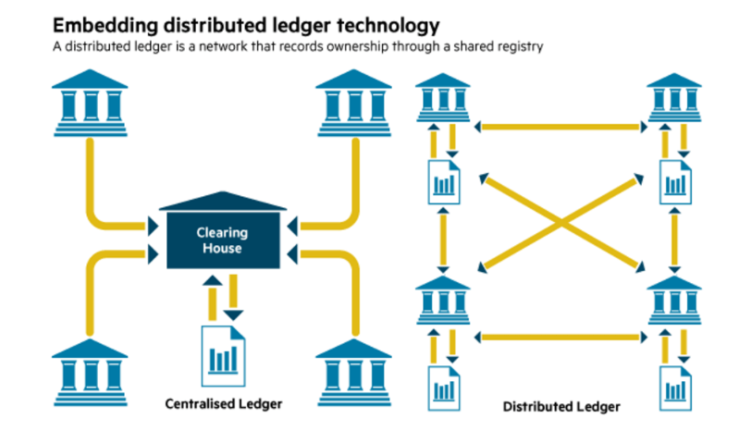 Where ever trust is needed, it comes in handy. Want to know where your lemon came from? If your Louis Vutton bag isn’t a fraud? That’s where supply chain management through blockchain is useful. Want to secure your marriage, your land, or educational degree, because your government can’t truly be trusted? Smart contracts on blockchain are the solution. We need new technologies like this, really, for any issue that  needs transparency or trust.

As scholars of media, science and technology, we really need to think critically about this technology now.

Different actors create their own discourses and interpretations
In any technology study, it works well to map out the actors. Let’s give this a go!

Actors: Investors, educators, lawyers, consultants, governments, NGOs, start-ups, journalists, critics, important sites and platforms. The landscape is huge. Governments may want to regulate citizenship through the blockchain, or regulate the entire application as such.

Interpretative flexibility: Different myths and interpretations have emerged around blockchain. Here’s a few common ones:

Blockchain is emerging and in a stage of design flexibility
An emerging technology also has “design flexibility”, to use Bijker and Pinch’s term. We do not know exactly how it will be developed, regulated and applied. User may also appropriate it in some forms, creating their own varieties, creative practices, and even subversive practices (e.g. hacking). There is much insecurity in blockchain. Are we speaking of ethereum, hyperledge, or elastos? Will there be one blockchain technology at a certain point, a dominant one?

The exact and final shape that such a peer-to-peer model may take is still unclear, and many even want to go beyond blockchain already (e.g. Holochain). Historically, innovation followed similar patterns. The bicycle had different designs and user groups, so did internet, which started far more public and regulated but became a commercial tech, driven by ISPs. The internet could have easily turned out another way. Few blockchains truly work atm, which ones will prevail?

We are from “rhetorical closure” in blockchain – there is no consensus and it is still in development. Many problems are not solved yet. Many applications don’t work yet, they are really just prototypes. A last huge challenge that these technologies should overcome, but also the toughest one, is fragmentation. We need to team up more to make his work. I am excited to see how this technology will innovate and evolve. Some technologies, by the way, also disappear or can’t compete. But I think blockchain, in some form, will stay. There is a real need for a decentralized, secure, peer-to-peer system in our increasingly datafied life.