As every cosplayer knows, costumes give us a peak into a character’s  personality. They are often the first thing that we notice about them, and it gives away a lot. As a fan of the superhero genre, I often reflect on how fashion functions as “disguise” and how masks and fashion can literally empower us. A change of glasses, a tiara, a sailor suit can make all the difference. Both in fiction and in real life, costumes have the power to transform us. This transformation is powerful and iconic, and it is a key reason why real fashion designers also draw heavily from costumes and the superhero genre. In this entry, I go back and forth from Jan Taminiau’s superhero and knightly collections to think about the relationship between fashion and pop-culture. 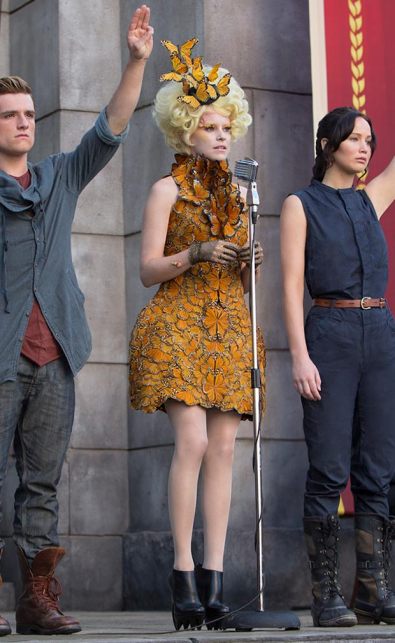 Glamor and Empowerment in The Hunger Games

A recent visit to the exhibition of Jan Taminiau’s fashion (worn by Lady Gaga, Beyoncé and Johanna from The Hunger Games) made me reflect on the dynamics of pop-culture and fashion again. Costumes are essential in fiction, and already tell us much about the fictional world that we are viewing. The Hunger Games relies on couture heavily,  especially when depicting the capitol. The first scenes in which we see Effie Trinket, she stands out like a sore thumb in the districts, wearing a bright pink jacket and an umbrella in the woods. We know that she’s different, eccentric, and takes pride in her appearance. Her quirky, queer and campy dimension already becomes visible in her fashion as well.

Alexander McQueen designed dresses worn Effie Trinket (see above) which exactly capture the richness and eccentric self-fashioning of citizens of the capitol. Fashion navigates the cultural anxiety within this fictional world. The Capitol’s bold colors, large accessories and shoulder-padded couture pieces are outrageous to us viewers, but also stand in sharp contrast with the grey and casual outfits of the colonies.

Victory and empowerment are central themes in Taminiau’s fashion. It’s no surprise that this fits the character Johanna, a previous victor of the games. For The Hunger Games. a piece from Taminiau’s collection Nature Extends was chosen with a high collar, which contrasts lace with softer, neutral fabrics. This piece cannot be seen without thinking through the entire Nature Extends collection which blends golden fabrics with silver details. In many of the outfits, silver palettes and armor details were used that remind us of knighthood. Worn as a film costume, the dress befits Johanna and her accomplishments. 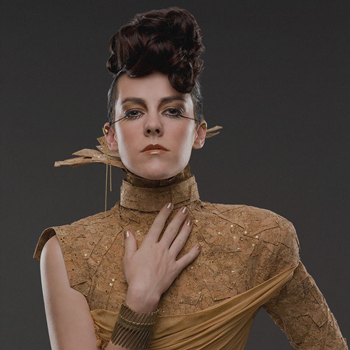 A key collection featured in Utrecht as well was “Marvelous“,  inspired by superheroes. In a mood board by Taminiau, we see Wonder Woman (with characteristic tribal elements and armor) and Mystique (perhaps chosen for her glitters and camp) featured as characters that inspire him. The pieces in Marvelous are rife with nostalgia and vintage, but also feature text balloons, pop-art designs and color-blocked fabrics, like an animated comic strip. Couture meets the art of Marvel. 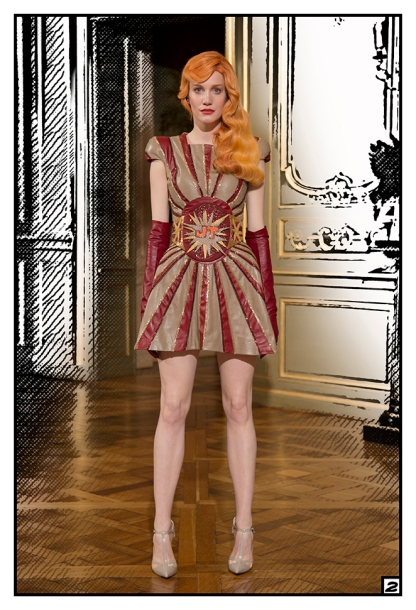 High fashion can be inspired by superhero comics, and the other way around, superhero comics and SF/F include high fashion in their world-building. From Star Wars to The Hunger Games, to create a sense of otherness, costumes are vital.

The costume design of Black Panther is a great example. Wakanda is part of Africa, but at the same time it is isolated by its advanced technology.  The costumes need to reflect this. The designs are heavily influenced by African history, but at the same time needs to echo futurism and stand out. Costume designer Ruth Carter breaks down these challenges well, and unpacks T’Challa’s entrance and the Warrior Falls scene:

Why are superhero costumes so powerful? Barbara Brownie writes:

“The superhero costume holds power because it achieves transformations. First, it transforms the hero into something beyond human, allowing him to behave instinctively, unrestrained by human weakness or social convention, fully occupying his superhero identity. Second, in front of the audience, the mask permits superhuman behavior’.

In media studies and feminist studies, we are speaking about costume more and more, which is good. Costume has the connotation of the staged outfit. It captures notions of performativity and rituality and representation, while fashion is perhaps its own art form. As Drake Stutesman writes in Feminist Media Histories: ‘Since 2010, “costume” has become increasingly separated from fashion. The ongoing conference Critical Costume, launched in 2013 at Edge Hill University in England and continued in 2015 at Aalto University, Finland, solely examines costume through multiple platforms. In 2014, New York University launched Film Costume/, a recurring film costume conference.’

Costume is key in many of the media that we consume each day. Yet we do not speak of it. The way that characters dress has huge implications for their characterization and tte narrative. Rorschach wears a trenchcoat in Watchmen, and that alone carries meaning. In Dressing Dangerously, for instance, Jonathan Faiers unpacks the history of the trench coat and its depiction in film noir. It is associated with anti-heroes, as depicted by Humphrey Bogart. The trench coat, according to Faiers, is imbued with “intrinsic restlessness”, and its incorporation into civilian life from its origins as military wear does not erase its “vestiges of combat, implied tactical know-how and, if necessary, aggression” (as summarized by Pop Matters).

Overall, costume as a concept allows us to think through identity and performance in which that “fashion” cannot. It also makes us consider the transmedia history of superhero costumes. The iconic outfits of Batman, for instance, contain many differences in each new iteration that befit the version of Batman that we examine. The tougher and robust look of the batsuit in Ben Affleck’s version go hand in hand with his performance, and depiction in the film. This goes against the previous version of Batman, such as Christian Bale’s techno-Batman, which relied heavily on gadgets, detective work and a bit of stealth.

Costume has meaning, but costumes are not always created for the fiction that they are worn in. Jan Taminiau’s fashion being picked up by Lady Gaga and in The Hunger Games films were happy coincidences. These were not commissions, but pieces that fitted the bill. Fan fashion can be a happy accident, but that doesn’t mean that we should stop exploring it.