I just love Twitch. Though I casually browsed it for ages, it was only a few months ago that I got truly hooked. My new thing is sitting on my couch with my iPad with lots of snacks, and watch players engage in table-top games via Twitch. I watch a lot of these. I am attentive to the chats, which are often just as hilarious as the game play itself.

Twitch is urgent. And I have raced back from the uni a lot of time the past months to turn it on. My favorite show at the moment is Hyperforce (though I’m ashamed to admit I was late to the show and watch this on YouTube). This nostalgic time-travelling Power Rangers extravaganza has been one of my best fan experiences this year. It made me rewatch tons of classic Rangers episodes, and I feel like the subtle references to the lore are just meant for Ranger geeks like me. It may not be quality TV but I love it. Part of that is the social connection – it feels like you are in that nerdy role-playing game with a geeky bunch of people who are even more knowledgeable about Power Rangers as you are.

Twitch is a great way to get back into an old fandom. It’s a powerful platform, but why? I’ll try to unpack that, and relate it to some trends. Twitch just released the classic Doctor Who episodes, for example, and proved there is a market for interactive television marathons too. (That is good news!)

Watching things on Twitch is great, because you can instantly respond on it with thousands of other viewers. Simultaneously, we form a haphazard community. Twitch is creates a sense of urgency and timeliness that has been lost in times of bingewatching and Netflixing. When we can watch anything, at any time, the social interaction gets lost a bit. What Twitch does well is facilitate an interactive and engaging space for narrowcasting.  Whole fandoms form around the let’s plays that are uploaded there, and watch this for hours. Perhaps many viewers are a bit like me – the multitasking sort. They leave Twitch on while also engaging in other tasks as well, since many of the campaigns take hours.

We see liveness, cross-posting and entire fandoms emerge around these table-tops. Playing Dungeons and Dragons is in a revival. This is partly thanks to the many let’s plays that use the system. The Adventure Zone and many other DnD podcasts have made a audience familiar with pen-and-paper RPGs. While I enjoy listening to these podcasts, Twitch offers its audiences even more. We can see the GM perform, the players respond, and the live stats. Even though it’s just a few people around a table, it’s exciting to see them perform. (And performance, as we all know, is one of the charms of role-playing). What I appreciate about Twitch, and also about many other vlogs and let’s plays, is that it feels intimate. I could be sitting at a table with those rangers, playing Hyperforce. That’s great. That’s the power of Twitch, as one user writes about a livecast of Fortnite:

Many studies around vlogging have shown that intimacy, authenticity and liveness are key to these media and their success. This is heavily related to the fact that this content has a history in amateur video and DIY. What is presented like user-generated-content, like something we could all do, is a carefully curated and produced medium in its own right. It may be posted on YouTube and Twitch, where we could potentially all upload videos, but just like the content of influencers, it borders on actual creative business and entertainment.

But Twitch is more. In collaboration with BBC, Twitch recently started an immense Doctor Who marathon of the classic Who episodes. It’s nothing short of amazing to be in that chat room, watching Who episodes with many other fans who immediately respond from all over the world. 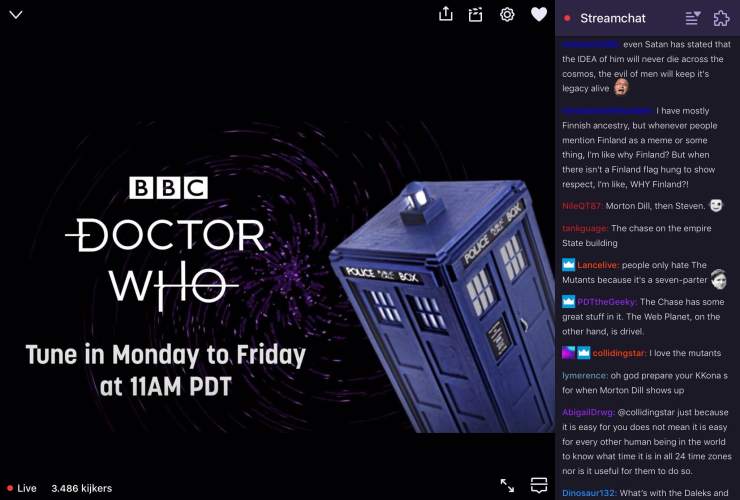 For many, this is the first time watching the classic episodes, and it’s a delight to see how they respond. And yes, the conversations are not always pretty. Companions and the thirteenth Doctor get bashed every five minutes. But in its best moments, fans function as mentors, and introduce each other into the lore of Doctor Who. The whole event spills over from Tumblr into other media. Fans grab screenshots, create memes, and cross-post with Tumblr and other platforms.

A true participatory culture is formed, in which fans interact, instruct each other, debate about each other’s tastes, and yes, every now and then there are trolls.

Just-in-time-fandom is what Matt Hills dubs this phenomenon in Fan Cultures. This refers to an interactive fandom characterized by temporality and a fear of missing out. But just-in-time fandom can also be easily mocked or become a one time gig. Just think about Eurovision’s Twitter explosion. Global audiences post their jokes, memes and observations under the same hashtag. There is a space for audiences to group around live content. Afterwards, we forget all about it, until the next Eurovision happens and we group around old memes again.

Still, there is a big difference between Twitch and Eurovision. In Twitch, everything is an integrated experience with audiences responding real-time to that content. As one user writes on Tumblr:

Perhaps the future of entertainment is not bingewatching, but liveness and events. Perhaps it’s not stuffy BBC archives, but the long tail. In that long tail, content is never forgotten and has an eternal shelf life. Just like the Doctor, these media are always regenerated. I appreciate the direction that Twitch has taken, and I hope more fan cultures will take shape on this platform, real-time.

Acknowledgements: For Niki Haringsma who introduced me to TwitchPresents: Doctor Who