By combining play and narratives, games often manage to evoke unique feelings and experiences. I just finished reading Bonnie Ruberg’s book, Video Games have Always Been Queer, which reads games as queer experiences. Games do not have to include queer representation to be considered “queer”, rather queerness is a potential for non-normative play in the medium itself. ‘Queer play can take a variety of forms – from playing to lose, to playing to hurt, to playing too fast or too slow’ (p. 18-19). I agree with Ruberg that gaming allows for counterplay, and that this is inherently tied up with feelings of appropriation, otherness and queerness.

In this blog, I’d like to draw attention to another process of identity work though, namely aging. Games are uniquely qualified to mediate the feeling of growing older, since they are grounded in space and time. Developers often play with these elements, along with narrative, to mediate such unique feelings and sentiments. Aging in games is often represented in active ways, which also stands in contrast with how aging is mediated on screen (as a passive end, as closure, as finality). In games, aging is often deeply connected to the past and active recollection, as much as with the future. I have recently played quite some games that captured the feeling of age and maturing quite well, and thought I’d share some thoughts. 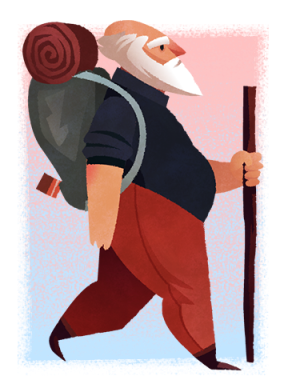 The charming indie game Old Man’s Journey is best summarized as a short puzzle game. You control a landscape of layers (mountains, walls, meadows) to allow an older man to traverse. When you line up the landscape well (see video below), the old man can climb up or down and reach his destination. Each level ends with the old man sitting down quietly and reflecting on his life. He thinks back of his wife, his marriage, his adventures as a captain on the sea, and his daughter. Slowly we find out what happened.

Aging is reflected in the game play well. We do not control or become the old man, but guide him. The old man has a cane and cannot walk very well, and as a player you will often feel like you are taking care of him. Water is a big theme in the game, since the main character was a former captain. The game play of aligning mountains will often look like you are creating waves. At one point in the game, you even sink under water, which represents the old man’s subconscious and the life choices that he made.

Games are uniquely qualified to mediate the feeling of growing older, since they are grounded in space and time.

The theme of memory is not a unique one in games about aging. I blogged about To The Moon before, which is all about restoring the memories of a dying man. To The Moon’s game play, however, is primarily about collecting these memories and observing them. That is a big difference with Old Man’s Journey where you actively help and guide the old man through the landscape.

Old Man’s Journey captures aging well, but passively. You do not control the old man but help him. While you see his point of view, it is clear that you are a player and observer, and that you are not put in his shoes. Rather, you are the caregiver.

In this narrative game by Dutch game designer Florian Veltman, you walk as a child in a colorful forest with your grandma to pick mushrooms. The two of you have often done this, and as you walk, you open up to each other. Slowly walking through this forest will feel familiar to many players. It is the perfect way of connecting. In key moments, you talk to your grandmother about what you have been through, and she gives you advice and opens up about her past. The game also flashes forward to you as an adult, walking the same route in a different tempo, in a snow-covered forest.

Walking is the main mechanic in this game. As a child, you can run fast, but your grandma cannot.  She stays on the path, while you can run off by yourself. This will make your grandma worry though. When I played the game, I felt that I couldn’t leave grandma by herself and often adjusted my pace to stay near her. While I enjoyed running in circles and back and forth, I tried not to stray too far and keep grandma in sight.

This game is dedicated to the people that give us the time and space we need when we grow up. Veltman writes that it’s a tribute to “people helping us become a responsible and caring person.” This also describes the game and its mechanics well which rely on care and observation. Small moments in the game stand out – spotting a blue heron in the forest, finding a mushroom, seeing your foot steps in the snow. Lieve Oma is an intimate game – slow but short – about growing older.

Speed and Stress in Catherine

Vincent Brooks is faced with a choice – stay with his longtime girlfriend Katherine or cheat on her with a girl he got to know at the bar, also named Catherine. Vincent is in his thirties and Katherine wants to get married. He is unsure how to continue. The narrative of Catherine depends heavily on the player’s choices. The gameplay is divided in two modes. The first is daytime, a visual novel mode where Vincent converses with his friends and makes choices. The second is his night time, a puzzle mode when Vincent is asleep and must climb up huge three-dimensional towers. The last mode is not particularly easy, even when you play it on normal.

Catherine perfectly echoes the pressures that come with maturing. His nightmares are represented by huge towers and these puzzles are not easy to solve. Players have to be fast as they navigate through them. This befits the theme of adulting. Obligations weigh heavy. There isn’t much time to make decisions and yet you have to take them. The speed, the rapid puzzles, the difficult bosses create purposeful stress to mimic the societal burdens that the protagonist has to deal with. The negative affects that come with aging are turned into game mechanics.

Catherine is a gendered game, and not always fun to play, but its aspirations are unique. I haven’t often stumbled on a game where play and narrative fit each other very well. The stress of decision-making is very real and timing is everything in this game. In a way, the high difficulty supports the theme of the game as well; it adds to the stress and challenges. Catherine‘s game play supports its message – time is scarce and we better grow up right now.

What is striking in all these games is that aging is a process that is mediated in movement, fast and slow. Time is a key component in puzzles, navigation and movement. Whether it is stopping to catch up with grandma (Lieve Oma), adjusting game levels for an old man (Old Man’s Journey) or running as a 30-something man (Catherine), aging is not just told or described, but becomes part of the experience and game space.

Aging, in other words, is fully integrated in the game play and its timing. Games do not only represent age, but manage to simulate it. That’s pretty powerful stuff.