A week after Dokomi it’s time for another Japan-related event: Japantag in Düsseldorf. Even though the festival is rather nearby, I never attended it. Because of language barriers and logistics, fan cultures in Europe still tend to be a bit local and fans often stick to their own country. I’m sure that I won’t meet many Dutch fans there (like at other festivals near the border such Animagic and Dokomi) but I go with a group of friends nonetheless. Japantag is about more than being fannish though. It’s promoted as a big, cultural event each year where Düsseldorf, a city with a nice Japanese neighbourhood, introduces Japan to its inhabitants. The last years it has drawn a lot of attention in the press and many German anime fans go there, but it’s about a bit more. It’s about the entire culture of Japan. There’s performances of Japanese art, music and fashion and popular culture is just a wee part of it. 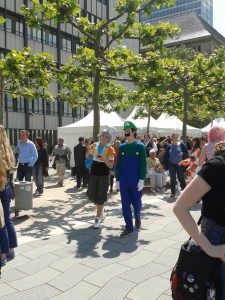 High arts meet fandom
We expect to see many interested citizens and a few cosplayers but when we walk near the station before going to the festival, we see that the Japanese neighbourhood is already welcoming the guests. The Japanese stores sell food outdoors and because it’s warm, the green tea ice cream and bubble tea draw particularly large rows. My sister already purchases some rare Tales-artbooks in a Japanse store in the Immermanstrasse, after which she bumps into some cosplayers that portray characters form the same series. Since I go to Düsseldorf quite often, I’m amazed to see the town centre so crowded and already so full with cosplayers that move their way up from the station to the Rhine, where the festival is held. Characters from Vocaloid, Naruto and Digimon meet up early and like us, already focus on scoring some merchandise in advance.

Once we reach the outdoor festival, it turns out that the entire field near the Rhine is filled with visitors wearing colourful costumes, Lolita outfits or kimonos and geek shirts. A big Hetalia group meets up near the bars near the Rhine and we follow suit when they move out to the festival. We already saw the festival boots from miles away when we crossed the bridge, where we’d parked our car. The white tents along the river all have different purposes and belong to different organizations. A little further than the tents, the German pirate party, that favours internet rights and freedom, promotes itself for the coming election. Not a bad idea, considering how important internet platforms are for anime fandom.

The festival has some traditional Japanese flavours as some wander around in Japanese garments and others sell water balloons. We come across workshops in kanji writing, flower arrangement and origami. Some booths sell little wind chimes and Japanese prints. In the middle, there’s a few stands that sell anime, manga and related merchandise and a booth of Nintendo. But the stands are not the most interesting thing. There’s a lot of diversity among the visitors and a lot of cosplays and outfits to see. When we sit on the grass near the Rhine just like hundreds of people – behind us, there’s a few stands of food and some martial arts going on – we simply admire what we see. It’s a lot like Animagic, where we spend the last years just hanging out on the grass and watching the brilliant outfits. Some fans play the guitar or take pictures of their outfits. We only leave when a few Disney princesses start to take up much space and start posing so elaborately that the photographers nearly stand on our bags. It’s hilarious, really. 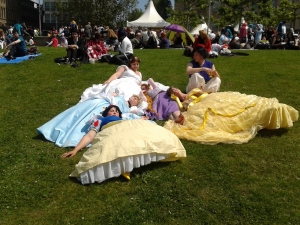 Urban domains
When my sister meets a German internet friend, we hang out near a few tents with behind us, a bar where socker fans are partying. Maybe they won a recent match? You think that the cultures would clash but they don’t. We tolerate, maybe even respect each other. The public domain is literally divided in sections. Here, the anime fans; there, the socker ones. Here, the real Japanese people; there, the fans that appropriate their culture. Still, it’s also important to realize that the city is also an active commercial partner to this festival, that brands its cultural image through these activities.

All in all, I found Japantag very interesting and telling about cultural appropriation. It’s fascinating how we all transform the urban space in our own ways and how media, from anime to sports, motivate us to do so. Within the urban domain of the city, being a cultural citizen gets new meaning, not just through festivals that transform the town, but also through unique neighbourhoods with foreign elements, such as the Immermanstrasse. Such streets have long since have long since appealed to aficionado of specific cultures positively, but some residents also perceive them negatively. This is part of the struggle over the public domain. Where Japanese culture is hailed in Düsseldorf, the inclusion of other cultures (e.g., Turkish culture) is sometimes perceived as a negative influence on the town and the country in general. It’s a sad fact that in many Western countries we celebrate some cultures and refuse others. Still, it’s good to see that towns allow for much diversity, if only for a little while. A festival might just be what it takes to get people together. And honestly, it’s genuinely nice (and slightly creepy) to see a young kid shake hands with an Assassin’s Creed furrie.