European Fan Cultures are important, but the field of fan and audience studies is dominated by Anglo-American studies. At the European Fan Cultures Conference (Erasmus University, 12-13 November 2015), many interdisciplinary scholars met to discuss the state of the art of fan cultures. Most scholars did not identify as fan  scholars, but what we shared was an interest in active audiences as a research object. Coming from sociology, musicology, psychology and other disciplines, we had a fruitful two days discussing research trends and results from our studies. I’ll list some key discussion points here! 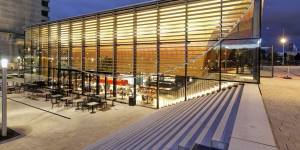 Since our focus was European fan cultures, the idea of Europe, and what is particular to a European fan identity, was discussed often. The key note of Cornell Sandvoss explored this in particular.

This belonging, or heimat, that fandom offers goes beyond national boundaries. Cornell Sandvoss highlighted its importants in a ‘postnational’ world, while other scholars, such as Camila Monteiro, emphasized that fandom is transcultural and should always be studied as a phenomenon that goes beyond particular cultures. Camila herself focuses on studying the role of funk in the favela – the Brazilian slums.

This belonging and the idea of European identity was much discussed in relation to the migration crisis. Fandom is all the more relevant in our postmodern, vulnerable world, where we need to form relations across countries. Fan activities can also be quite dark, as Stijn Reijnders pointed out in the closing. He gave a short plea for examining the nexus between fandom and politics – the followers of psychopaths, IS and the like. Fandom signifies belonging, but it can also be mobilized by political forces, and some fans may be actual fanatics in a negative sense. These conflicts should also be studied. Little did we know in the evening of last conference day, Paris would be struck by terror attacks from IS.

Fandom makes us feel at home in a global world and anonymous space – Prof. Stijn Reijnders

2. Fan studies should be inclusive

At this conference, in particular, I noticed how often we generalize the audience, and overlook important segments of the audience. This is partly a methodological question that was raised often during the conference. Many audience studies are problematic in terms of sampling –  the samples are student population and therefore not diverse in terms of age, presenters like Gary Sinclair stressed.

Age was a hot topic and also the focus point of one of the panels. Tom Philips for instance presented on wrestling fans. Especially elderly female fans of wrestling have a long history of being ridiculed as “fanatic grannies”. This kind of stereotyping can harm them, but it is also problematic for the entire community, as this form of fan behavior came to represent the entire wrestling fandom in the public discourse. This is an issue of over-representation that can also be damaging, and we should be critically aware of this.

Many stereotypes also exist around the audiences of yaoi: gay romance in manga/anime. Yaoi is also a good example of both a transcultural space of belonging, but also a specific fandom in which there are many assumptions. Simon Turner stressed that this genre is always framed as about being written by and for straight women. For many women it is simply queer and includes femininity and ideal (genderless) love. It is the same, Turner stressed, for men. He argued that: ‘Yaoi can also empower straight men, who reject traditional masculinities and heterosexual relationships.’

Finally, we tend to have many biases informed by the countries that we are from. One talk in particular was inspiring in this sense. The Russian scholar Natalia Samutina discussed the significance of language, canon and politics on Russian fan fiction. This fiction could never be too explicit, because romance literature emerged very late in Russia, and was looked down upon. It could also not be too explicit because of the political landscape. Therefore, writers turned to allegories rather than pornographic motives. Samutina also told us that being outed as a slash writer could ruin someone’s life in Russia. It’s the kind of thing we can hardly imagine in many other Western countries. 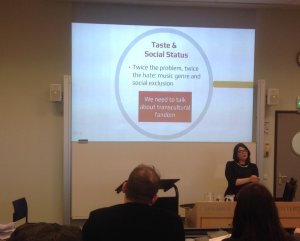 Any approach to fan studies should include the audience somehow, and while surveys can be great in gathering trends and opinions, overall we need to turn to qualitative methods to ask for meaning. Cornell Sandvoss, for instance, found in one of his quantitative studies that gamers were the least likely to engage in civil action. But why? Aren’t gamers also known for their activism? These results need more framing that only qualitative studies can account for.

But what methods are suitable? At the conference we saw some really interesting ones. The Dublin music project scholars, for instance, literally led their informants draw maps of Dublin to envision its music scene. This literal “mapping” of the space led to interesting results which the scholars than close-read to better understand how Dublin was seen. When you research civic action and engagement, this participatory mapping method might be the thing for you!

In terms of visual methods, Pilar Lacasa also refered to Sarah Pink’s work on visual ethnography and dana byodd’s It’s Complicated. These handbooks offer more participatory ways of studying fans and teenagers. Especially these visual ethnographies are something that has interested me lately, and something that I’d love to experiment with in the future. I can really see this work for cosplay and vidding, for instance. When informants contribute creatively  – and fans are very creative – they might be able to voice their craft in a better way.

There were some statistical studies in our sessions too, and what I noticed in many of these were the problems of creating a decent sample (not necessarily in terms of validity, but often in terms of representation). Carlo Galimberti for instance did a research on Italian fans of Mad Men and GoT and was able to find many more GoT fans, which he considered a bit problematic. Why weren’t the Mad Men fans contributing? Was the show less popular with fannish audiences, for instance? 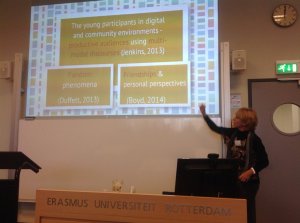 4. New forms of creativity emerge in fan cultures that we should look at

As for unique creative fan activities, Sophie Einwachter and her colleagues investigated LEGO fans, who are really into building their own creations. For them, LEGO is not play, but an art form. The team did research on different LEGO fan clubs, and found that LEGO is a culture, rather than adult play. It’s not about collectibility either. LEGO offers challenges, and creating a beautiful build can be very rewarding. Sophie and her colleagues also argued that close-reading the recent LEGO film sheds light on its fandom, as it is a plea for creativity and MOCs (my own creation). They looked at the movie in great detail, and how the 3D designs managed to emulate a feeling of authenticity and materiality. Through lens flare and little imperfections in the textures, the movie managed to create the hand-made feel that fan-made stop motion animations have, and pay tribute to the LEGO fan culture.

Likewise, I greatly appreciated Sebastian Svegaard’s talk about analyzing fan videos as a form of criticism towards the media text and fan culture itself. Having a background in musicology, Svegaard pled that we should study fan videos not only in terms of cinematography, but also in relation to lyrics and cues. Music literalism was an interesting concept that he coined (e.g. scene edited to make character sing out words from song). This device adds voice/PoV to the fictional characters.

As I do some work on vidding myself – and always close-read them in relation to lyrics and beat – I can really relate to talks like this. I can also imagine working on this more in the future, since I am crazy about music videos that are partly animated – such as these multi-fandom Disney videos, and would love to close-read these once for a paper. There is some work on vidding, but I often feel that the lyrical/storytelling component is generalized in these readings in favor of a corpus/genre analysis.

This conference was very enriching, and I realized that there are many topics that we should still study further. As media technologies and fan cultures progress, we might ask ourselves: Is there still a typical fan identity? How are the creative industries adopting fans, or marketing to them? In terms of business models, how can fan activity be legalized, for instance through streaming, contests or crowdfunding? What fan activities or fan audiences are we not examining? And how can transcultural fandom best be examined, without overemphasizing national borders? 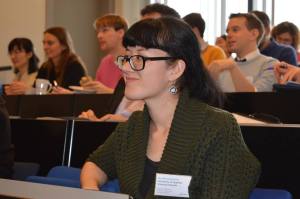