This weekend, August 29th to August 31rd, I attended Abunai!, one of the biggest Japanese pop-culture festivals in The Netherlands. This fan convention has been held since 2003 and is one of the largest in The Netherlands. With over 4.000 attendees, this edition was even larger and a happy meeting place for many young fans in their teens and twenties.

Abunai! is a convention that has a long tradition of interesting opening ceremonies. Commonly, the staff members work for months on a video that parodies them, the convention and plays at the convention’s theme. This year the edition was called Class Dismissed, and we were treated to a high school version of Abunai. The staff members assumed the roles of teachers and newly minted students to Abunai’s school of manga. We were treated to a very well-written video that included battles between the tea ceremony club and manga club, the kidnapping of the beloved headmaster (chair Lennart) and various plot twists.

Abunai! hosts loads of competitions. The smaller ones are in digital games or silly ones, though I believe that there was no noodle slurping contest on the program this year. The big competitions at Abunai!, as most years, were a cosplay fashion show, a cosplay act competition and an AMV competition which were all spread across the various days of the weekend. The fashion show I had to miss out on, partly because the event ran late, but I heard great things about it. I was also happy that Team Paraluna won with a femme Commander Shephard outfit that kicked ass. The cosplay acts were good and a Dutch group, Sugoi Cos, stood out again. They always do very clever cosplay skits with mixed media. Videos are a part of their repertoire but this time, for their Black Lagoon act, they had also fabricated a life-sized paper doll of Justin Bieber, inspired by South Park and Terrance and Philip. Equally impressing was the winning act, which consisted of a very large team of about twenty cosplayers doing a very complicated dance. Other acts drew from Frozen, The Legend of Zelda and more to entertain the crowd.

The AMV competition consisted of 24 videos of good quality. Most of them are not online yet, so I’ll upload my favorite from last year. I was really impressed by the Dutch vidding scene, which seems to be developing as fast as the cosplay scene. For a small fan scene, The Netherlands seems to be going strong.

A new event that drew many visitors as well was a masked ball for cosplayers. The room got full pretty fast, though a lot of people fled once they realized that it was indeed a ball and that they were expected to dance with some reserve and skill. Many people showed up in fancy dress, or had donned on hilarious outfits. I bumped into several people that were suited up while wearing extremely realistic pigeon masks. (Since I have recently written about Hatoful Boyfriend, a pigeon dating sim, this amused me very much). I saw a ball gown version of Officer Jenny, Beauty and the Beast, and a variety Adventure Time cosplayers. Having underestimated this event, and also partly misunderstood that it was a cosplay event and not a gala, I felt a bit down that I hadn’t fabricated something for the occassion.

Parties included a geek club night and various dances hosted by several DJs. It often felt to me that Abunai! starts just before midnight, when the parties are strong and the bar (a really good bar, mind you!) is crowded. 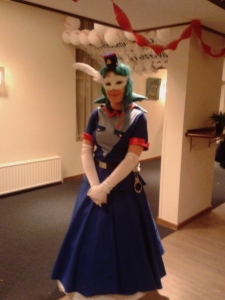 As always, I had a great time just trying different types of food, drinking bubble tea and generally enjoying the company of friends and other fans. During downtime, I often went to the Mangakissa – a Dutch manga library that is present at many conventions, but also has a permanent location in Utrecht. They had invited the Dutch storyteller Abe, who usually performs at fantasy fairs and historical events, to perform some Japanese myths. He did a tremendous job delivering us those stories with a historically accurate, dramatic performance. For me, the kissa also meant an opportunity to catch up with What Did You Eat Yesterday?, a surprisingly realistic gay-themed food manga. Aside from the Kissa, fans could wander into the manga school area to draw at any time.

Workshops in martial arts, dancing and other activities were present, and lots of Japanese culture, related to manga and food. For older fans, more lectures and panels rather than workshops might have been nice, but the overall atmosphere was vivid and fun.