Media fandom as we know it today centers around texts (films, novels, games), characters and celebrities that fans love, and keep going back to. What if some of these, if not all, are replaced by algorithms or AI?

We live in a time where technology is changing rapidly, and changes all aspects of our society. The game changers are big data, robots, sensors, virtual experiences and economies, but also AI. The latter is already changing creative work substantially – AI-driven marketing campaigns, an AI director or camera man, AI-computers such as AIVA and more.

Self-learning systems are emerging (though most of these are fairly narrow), and more broadly speaking, algorithms and procedural systems are enabling creatives. Man and machine work together in games such as No Man’s Sky, which offers a rich world where each player can encounter planets that are procedurally generated. The universe is immense. Players can name the planets they find, but the chances are small that someone else will also stumble upon them.

While these technologies may not readily replace real creatives, they are already becoming a thing, and their creative work is appreciated. In fact, some AIs and predictive texts are already celebrated and led to fan communities. Let me run you through some examples.

Based on a database of Harry Potter books, Botnik Studios generated a predictive texts as the new Harry Potter. It went viral immediately. The chapter The Handsome One is eerie (“a great black ceiling, which was full of blood”), and absurd (“Ron’s Ron shirt was just as bad as Ron himself”). A lot of fans appreciate that, while it’s bad, it also has dark humor that is totally out of the box. Indeed, no human could have come up with this. It reads like an extreme piece of fan fiction, and is already getting the cult following like other Harry Potter pastiche such as My Immortal and A Very Potter Musical. Tumblr basically exploded, and if you have a quick glance, you’ll find quite some beautiful art under the hashtag #beefwomen on Twitter too! Some highlights here. 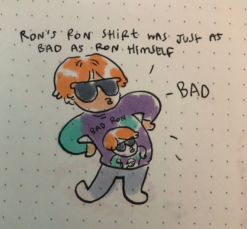 One other potential that I see for fandom and AI/procedural systems is the chatbot. These are already used for marketing and media purposes to bring us closer to our beloved characters. The Spiderman and Star Lord chatbots from Marvel are a good example, though they are rather narrow in their responses. If you want to try it out, go to “m.me” to address Spiderman on Facebook Messenger, or send a Twitter direct message to @Marvel or @Spiderman. Recently a team of researchers was also working on a chatbot of Joey of Friends. As Telegraph states: “The researchers created “a system capable of learning to generate talking avatars of characters appearing in TV shows”, which they claim could make fictional characters “virtually immortal”.

The chatbots bring us closer to fictional characters and truly animates them. This suggests an intimacy that may resonate with fans, since they often seek this feeling themselves through costumes, role-playing and other practices. What if at some point these fictional characters actually are combined with AI, and can think and learn for themselves, and communicate with us outside of the text as well? A fascinating thought, though it also brings to mind classic Black Mirror episodes.

I’m quite curious how the emergence of media created by AI will feed into fandom. The discourse is quite positive at the moment, and it’s certainly interesting to think about the creative industries and fandom as spaces which don’t just exist of humans, but also of machines in the near future.