The last three days I attended Comiket in Tokyo; the largest festival for self-published fan works (doujinshi) in the world. Because I want to publish about this elsewhere, I´ll keep this post a bit short and fannish. So let’s just bust some myths about this event! 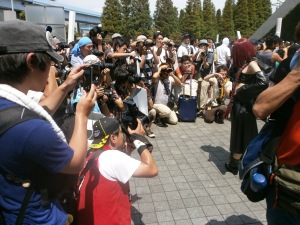 True: In every otaku manga you will read, you see perverted guys at Comiket flashing their cameras at scarcely dressed ladies. This is a true fact. The photographers do line-up for the cosplayers in the cosplay area and many of them are men.

True: Comiket is sweaty and busy. Prepare for the worst, put on some otaku spray and go late if it’s your first time. Even if you think everyone is standing still, often you’ll find that they are actually moving quite rapidly. In Japan, they manage large crowds very well, so don’t worry. 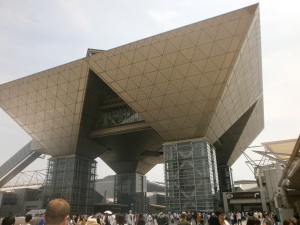 True:  Comiket has a confusing lay-out with many circles spread out over different halls. Try to be informed about where your favourite artist is or ask the information desk about a specific series. Otherwise, enjoy browsing the thousands of tables. I spent quite some time figuring it out and once I got the hang of it, day one was already over. It was a surival trip and I didn’t bring enough food. There is a Familymart in the building and loads of vending machines but people line up in front of them quite fast.

True: Everything is in Japanese. Even the catalog. There aren’t many foreigners going there, only some, and apparently they are not worth the trouble. There are some staff members that speak English. Good luck finding them.

True: Fans do spend the night at Tokyo Big Sight in anticipation of this event eventhough it is forbidden. This year’s catalog featured a gag comic of Tiger and Bunny laser-eyeing them.

True: It’s best not to take pictures inside. As far as I understand it is not entirely forbidden but no one should be recognizable. Probably this is because there is still some stigma on going to Comiket, even if hundred thousands of other otaku are doing so too. Then again, some content that is sold here is a bit perverted so I understand. In the cosplay area, go right ahead but ask cosplayers and thank them in your best Japanese.

False: Comiket is not only about self-published books or doujinshi but about all kinds of self-published (fan) items. Especially on Sunday, there was loads of arts and crafts. Also, people were selling non-fiction like autobiographical comics or journals, fan essays, travel guides, places with good food and fan guides to other countries or simply to Akihabara. I spotted loads of indie-games (often dating sims) on Saturday. I was also amazed about how cosplayers printed their own photographs, published them on DVD-roms or made photo comics.

False: The fan comics are not just boy’s love works or ecchi ones. There is a good diversity of comics going on at Comiket, where fans also sell little comics about their own cat or lizard, yonkoma starring their own original characters and beautiful artbooks or prints.

False: Comiket is not only new fandoms. Rose of Versailles, Ghost in the Shell, Sailormoon and other series were very well represented. Various rows were devoted to Tezuka’s work and classics like Case Closed. The catalogue lists these per table quite nicely.

False: Some people suppose you can go to Comiket one day and can get all the things you want. The set-up however changes completely very day and the focus is on different genres. It really pays off to be there three days, even on days when you least expect it.

False: Comiket is not exclusively fan works. There is a whole hall with company booths that sell exclusive merchandise. This year, the only Western company attending was Google, promothing their Google + personalization features. Hell if I know. Here’s a part of their flyer.